On Such a Full Sea - Chang-rae Lee 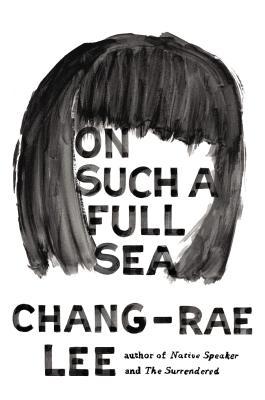 This is a strange novel expertly written.  It is a dystopian novel taking place after most of the worlds' civilizations have been wiped out due to disease and pollution.  Baltimore ("B-Mor" as it is now known) has been resettled by "New China" immigrants and society has been starkly stratified into the counties (rural poor), settlements (middle-class, highly-structured communites - B-Mor being one of them), and the Charters (the elite living in secured, gated communities).  The B-Mor community as narrator tells the story of Fan, a diver tending fish tanks who suddenly leaves after the disappearance of her boyfriend, Reg.  Although this could have easily been a highly political novel, it is primarily the story of Fan finding her way through these strata and her affect on those around her:


"What hasty preparations we make for our future.  Think of it:  it seems almost tragic, the things we're sure we ought to bring along.  We pack too heavy with what we hope we'll use, and too light of what we must.  We thus go forth misladen, ill equipped for the dawn.

But not so our Fan.  She wasn't a prophetic one, as we know, or always ever ready, nor was she chosen, at last, to lead anyone but herself.  For at every turn, whether she bore a full satchel or one slim or nothing at all, she stood resolved, her boldness not one that simply pushed her forward but rather fixed her, solid, on the very spot she found herself.  Where you are.  Did this make her impervious?  Heroic and wise?  Not at all.  She was as subject to chance and malice as the rest of us.  She could only entertain hopes for the future.  But we know very well that there was a quality about this rootedness, which, unlike the rest of us, she never bemoaned or fought or disbelieved, that every person who met her couldn't help but recognize with a gentle trembling."  p. 301

Chang-rae Lee has given us a Greek chorus that brings us along their musings about Fan, how the community views her absence in various regards and, yes, describes some political undercurrents.  However none of this is "on the nose," and I would be hard-pressed to find a "point," or something that Lee was trying to demonstrate other than, perhaps, that everyone, no matter what class, can live a very narrow and myopic life, only needing to look up from our labors once every so often to gain perspective:

"We watch ourselves routinely brushing our teeth, or coloring the wall, or blowing off the burn from a steaming yarn of soup noodles, and for every moment there is a companion moment that elides onto it, a secret span that deepens the original's stamp.   We feel ever obliged by everyday charges and tasks.  They conscript us more and more.  We find world enough in a frame.  Until at last we take our places at the wheel, or wall, or line, having somewhere forgotten that we can look up."  p. 193

I imagine this book would be frustrating for some.  As one reviewer noted, it is more Philip Roth than Philip K. Dick.  Lee is one of those authors, however, whose writing is so well-crafted that although his story may not be full of fireworks and even drag in places, the writing pulls you along and is a joy to slow down and appreciate.
Posted by Dawg at 7:18 PM